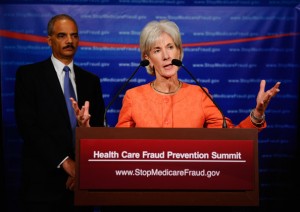 At a press conference last Thursday, Secretary of Health and Human Services Kathleen Sebelius and Attorney General Eric Holder announced the creation of a “Public-Private Partnership” to prevent healthcare fraud. The voluntary partnership between federal and state agencies, private healthcare insurers and fraud prevention groups is designed to share information among all groups proactively to go after common healthcare fraud schemes. Sharing information like best practices, front line observations on emerging threats as well as “scrubbed” patient population data will allow coordinated efforts between payers and law enforcement to stop fraud before it happens.

“Previously, neither the government nor insurers chased the money until it was ‘out the door’ in what has been called a pay-and-chase model.  Now, we’re taking away crooks’ head start” – Secretary of Health and Human Services Kathleen Sebelius

Building on new legislative tools passed as part of the Affordable Care Act, as well as initiatives like the Healthcare Fraud Prevention and Enforcement Action Team (or HEAT for short), the new public-private partnership is designed to share intelligence with all stakeholders in fraud prevention so more fraud can be prevented as opposed to prosecuted.

For fraudulent providers and billers, the effects of the new partnership should be pretty obvious – more and better ways for you to get caught. But for the the compliant majority, data sharing partnerships like this one provide insight into how payers law enforcement will be working together in the future. As more health data is standardized, easily blinded and shareable, information partnerships between all parts of the healthcare ecosystem will become more common, and software vendors will find more ways to slice and dice the “big data” to detect fraudulent billing.