Can Your Employees Change If You Don’t Believe They Can? 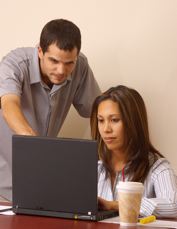 Most of us have heard that interviewers make up their minds about applicants in the first minutes, or even seconds of an interview.  But what about once the applicant has been hired, or even once an employee has been with us for several years?  Do we base our beliefs on an employee’s ability to take on a new challenge or improve their performance on something real, or things we believe to be real?

New research shows that managers with a fixed view of people’s attributes tend to “ignore improvements or deterioration in the performance of their staff, and are also less likely to ensure they receive the training they need.”  The research findings, reported on the British Psychological Society Research Digest Blog, are as follows:

One study, for example, gave managers negative background information about a fictional employee before they were shown that same person performing well at a negotiation task. Managers with a fixed view of personal attributes (they tended to agree with statements like “As much as I hate to admit it, you can’t teach an old dog new tricks. People can’t change their deepest attributes”) subsequently rated the employee less positively than managers with a belief that people can change.

Another study found that managers who think people’s attributes are fixed gave their staff less coaching, presumably because they think such interventions will be ineffective.

The good news is that once managers become aware of these findings, they can change their minds about employees being able to change and improve!  Read the article here.