Before and After: How the Sequester’s Cut will Change Your Medicare Reimbursement 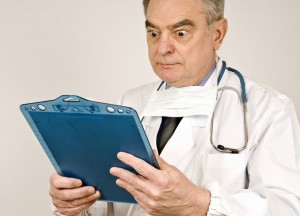 This is no April Fool’s Joke for medical practices and providers: starting Monday, April 1st, we will face a 2% cut in reimbursement for services due to the “sequester.” The sequester is the other half of the “fiscal cliff” that we reported on back in January. Although not too long ago, all the conventional wisdom was dead set against the government “going over the cliff,” and here we are with both automatic tax hikes and spending cuts now a reality.

Managers might  find themselves giving the same explanations about gridlock to the doctors that you gave your employees when their first paycheck of 2013 was lower than usual.

Although the cut is only 2%, it comes entirely from the 80% of the allowable that the government reimburses, as opposed to the 20% patient responsibility. The cut does not affect the Medicare patient’s co-insurance, not does it affect the 2013 Medicare Part B deductible.

To give medical practice managers an idea of what that cut will look like, here are some sample numbers.

Let’s Assume: a solo primary care physician sees roughly 500 patients a month, 30% of whom are Medicare-enrolled. Of the 150 Medicare patients seen per month, a quarter of them are new patient visits. Let’s also assume that about 40% of your Medicare visits are coded as level 3 office visit, with the remaining 60% coded as a level 4 visit. If these numbers seem oversimplified – they are, but I’m hoping to keep the math a little under control. Using the unadjusted, national reimbursement of these four basic CPT codes from the AMA, here’s how the sequester would affect a practice.

The beginning of the calendar year is already tough on many practice’s cash flow because of deductibles restarting. A 2% cut in Medicare reimbursements from Uncle Sam is not going to help. As for the future outlook of the sequester cuts, there has been no real movement on the part of the Democrats or the Republicans to replace the cuts now that they have happened. For the time being, they seem here to stay.

We are advising our clients to take a look at their financial policies and collection procedures in the wake of these changes. Collecting patient-responsible co-pays, co-insurance and deductibles on the front end is more important than ever. One idea that we recommend every practice take a look at is starting a credit card on file program in your practice to cut collection costs, increase front-end collections, and reduce days in accounts receivable (A/R.)

Our next webinar – “Starting a Credit Card on File Program in Your Practice” will be Tuesday, April 2nd, 2013, and is a 60-minute program designed to give you all the tools you need to start a program in your practice. We’ll hope you’ll join us. Register Today!