Why Healthcare Loves the iPad 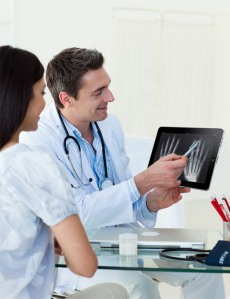 Since first hitting the market in January 2010, the iPad and its successors have been somewhat of an anomaly in healthcare technology. Outside of cutting edge clinical treatments, the healthcare industry normally lags behind other sectors in adopting new technology. Not so with the iPad, which has become a favorite of healthcare providers in both private practice and in hospital settings. Why, you ask? Because the iPad bypasses a lot of the usual frustrations providers have with technology. The iPad is small, lightweight, fast to start, easy to use, smaller than a patient chart, can fit into some whitecoat pockets, affordable, tactile, and has thousands of healthcare-related apps available.

At the time the first iPad was introduced, John Halamka, HIT rock star and CIO for Beth Israel Deaconess Medical Center said “My general impression is that it’s not perfect for healthcare, but it is closer than other devices I’ve tried. It will definitely be worth a pilot.”

In March 2011 when the iPad2 was released, Halamka said in a promotional video “What we have tried to do on the iPad is give doctors at the point of care the tools they need at the exact moment the doctor can make a difference.” Thousands agreed and by the end of 2010, iPads were being used by 22% of all U.S. physicians. According to Healthcare IT News Senior Editor Patty Enrado, “In a February 2011 survey by (Aptilon), four out of five physicians said they plan to buy an iPad this year.”

July of 2011 brought a game changer for the iPad in healthcare. Drchrono, the first EHR for the iPad, gained meaningful use certification. Even more radical? Drchrono was free, completely changing the playing field for physicians heretofore paying an average of $30K each for an EHR product.

View the Apple video below for a look at how HCA uses iPads and iPhones.

Regulatory challenges for the iPad

Beyond the 40,000 medical apps for tablets and smartphones available for information, tracking and collaboration, there are also apps being developed that will be governed by the FDA.

In August 2011, the FDA proposed draft guidance for medical apps that requires developers to apply for approval to confirm their app is both safe and effective. The approval process can take up to 20 months, however, which is very slow compared to the rate of app development and deployment. Included in this group is any app that allows patients to send medical readings such as blood pressure and glucose to their physicians.

Expect even more healthcare apps to be developed for the newest iPad, based on the fact that it is “the first tablet to support the Bluetooth 4.0 standard which is being adopted by all sorts of medical & sensor devices due to its low power requirements and ability to run for over a year on a small hearing aid size battery, ” according to online commenter Wayne Caswell.

Healthcare IT Challenges for the iPad

I’ve been employed by several hospitals over the years and every time I’ve asked, I’ve been told the HIT Department will not support Apple products. Physicians are not taking no for an answer, however. In non-Apple environments, physicians are telling the HIT departments to “Make It Work.” In the age of pay-for-performance, iPads and iPhones can make a significant difference in physician performance, and not insignificantly, physician quality of life.

Commenting recently on using the latest iPad for viewing images, Dr. Elliot Fishman, Director of Diagnostic Imaging and Body CT at Johns Hopkins Medical Center said, “When you speak to surgeons at Hopkins, they say that they save about an hour of time each day from using the iPad. And that’s a big deal—instead of going home when their kids are asleep, they get home when their kids are awake.”

Joy Pitts, the chief privacy officer in the Office of the National Coordinator for Health Information Technology, recently spoke at a general session of the annual conference of the American Health Information Management Association (AHIMA). She discussed sharing of patient information responsibly and noted, “While the use of tablets and other mobile devices are on the rise across the board for clinical applications, 49% of healthcare facilities do nothing to secure these devices. Ensuring mobile assets are properly managed and secured should be a top initiative for healthcare IT leaders heading into 2013.”

The iPad is Everywhere in Healthcare

Despite the challenges, the iPad is in use across the U.S. and across the span of healthcare because it keeps getting better and developers keep making apps that open new doors. As apps become regulated by the FDA, and hospitals and clinics get better at educating users to lock down their devices, safety and security will be mandated and manageable. Healthcare managers everywhere should be asking before purchasing new technology, “And this works with our iPads how?”