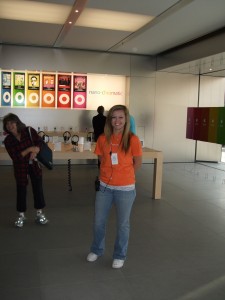 I stepped inside an Apple Store last weekend for the very first time, and had an amazing customer service experience.  For one thing, the doors were wide open.  There may have been detectors at the front door to make sure I didn’t try to steal anything, but I didn’t see them if they were there.

Walking inside I was immediately greeted by an Apple employee.  Not an employee standing at a podium or sitting at a desk, but one wearing an orange shirt and a headset who greeted me and asked how she could help me.  I explained that I was thinking about a new laptop but didn’t know a lot about Macs.  She told me she was the concierge and her job is to match customer needs with Apple store staffers and service.  On the very busy saturday that I was there I saw three concierges (conciergi?)  Our concierge told us that she would send the next available specialist to us and she asked for our first names.  She invited us (Doubting Thomas husband accompanied me) to look at the computers while we were waiting.

At other stores I’ve visited for the purpose of buying electronics, there is one, or sometimes two of each model.  You may have to wait a bit to see the model you are interested in if the store is busy and it is not unusual to go through an extensive decision making process only to find the model you want is not in stock.  At the Apple store I rounded a large rectangular table twice before it dawned on me that I was looking at six of the same model of computer, and that the next large table had six of another model.

One thing that struck me quite forcefully about the Apple store was that it was so different from I had EXPECTED and had formerly ACCEPTED.  We expect and accept wasted time, poor service, poor attitude (the last time I was at a big store I asked the salesperson if he was having a tough day he looked so miserable) and out-of-stock items.

After about 15 minutes, David (in a light blue shirt) found us.  The things he discussed with us were: 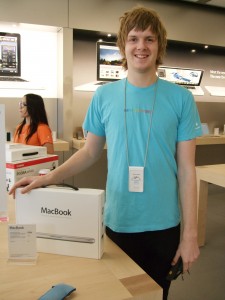 I made my decision after about 20 minutes of discussion and David left us to get my new computer.  He returned with my computer and a handheld credit card swiper and asked if I would like a paper receipt or an emailed receipt.  All this took place at the demo table about three feet from the concierge and about six feet from the front door of the store.

What lessons will I take from this for the practice I manage?  First of all, I’m thinking about adding a concierge (should I think of a different name? maybe I’ll have a contest!) to greet patients.  This could potentially solve several problems that I have.  One is the logjam and lack of privacy at the front desk.  The concierge could greet patients very personally, and could get them established with paperwork, insurance cards, etc., as well as answering questions and making sure patients have what they need while they’re waiting.
Taking ideas from other companies and fields is one of my very favorite things in the whole world.  I have more ideas about changing things in the practice since my visit at Apple, but I’ll save that for another post.