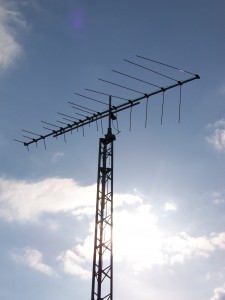 It seems only yesterday we got along just fine using words like “photography” and “cable television” without the world “digital” in front of them.  They were “analog” technologies, but they didn’t need to be marketed as such, because there was no point – there was no marketing buzz on the term, and no alternative.  Nowadays the word “digital” is everywhere and is accompanied by a very positive connotation.  It seems if you are selling something “digital”, it is a superior, more technologically advanced product or service, and it probably lies on the cutting edge of its field.  Digital is an old buzzword, maybe even a little past its prime, but it is still used heavily to promote what are already standard, mainstream technologies.  If you Google the word “digital” the search engine returns around one billion web results.  Compare that to “health care” which gets only a tenth of that.

Good question!  Digital is a word I imagine few can give a succinct, straight definition for.  For all the triumphs and innovations of the “digital revolution”, I doubt that there are a lot of people who can define the term’s root-word.

Let’s talk about theory here for a while, in abstract terms.

Imagine a two clocks on the wall of your office. Both are set to the correct time, and are the same model, except for one small difference. The clock on the left is always moving. The second hand of the clock sweeps around the dial in one long stroke, as do the minute and hour hands, although much slower.

The clock on the right is not always moving. It jumps second to second in a “tic-toc” style, and when the minutes, and hours are finished those hands jump as well. Both clocks represent the same piece of information- what time it is- but they have two different ways of representing how the time changes from moment to moment.

The clock on the left is one constant motion, and so it never stops to tell you “exactly” what time it is, but does tell you when the time is between seconds (not very useful, but remember we’re being theoretical). The clock on the right is much more specific (you can tell exactly what time it is, to the second), but never reports time in the intervals between the seconds.

This distinction, between a continuous flow of information, and a constant drip-drip-drip of individual pieces of data is the difference between analog signals and digital signals.

Back to the real world

You remember music records, right? They were flat, circular pieces of vinyl that could be put into a primitive version of what looked like a large CD player. If you had electricity, you could plug this “record” player, or “turntable” into a power outlet, and attach it to a set of two speakers using pieces of wire. The player would turn the record at a constant speed, and then the listener would carefully place a delicate needle attached to a mechanical arm on the record player onto the surface of the vinyl and under optimum conditions, sound would be produced through the speakers. There were all manner of musical groups that made these records, and they could played at parties or by yourself for solo enjoyment. The whole affair was quite charming.

Record players work by having the needle run gently over the “grooves” of the record, which are imprinted on the vinyl in such a fashion that the vibrating needle will quietly reproduce the recorded sound. Then the record player electrifies and amplifies the sound, and boom- party time!

There are no “gaps” in the record when it is playing. Even while the record is silent, the needle is running over an empty groove that isn’t vibrating the needle. Even when the signal is blank, it is part of the entire record, and it’s continuous playback. Record players therefore, are an “analog” technology.

I grew up with compact discs. Compact discs are actually very similar to vinyl records in how they operate. A CD player spins the disc at a constant speed, but instead of a needle running over the grooves, a laser (Light Amplification by the Stimulated Emission of Radiation) is focused onto the grooves, and is reflected back onto one of two sensors, which then create a series of data points that are turned into music. But the key difference is in how that sound data is represented. Instead of a continuous flow of sound, a CD is comprised of billions and billions of these tiny data points. Every second of sound on a CD is 44,100 individual pieces of data that tell the CD player what sort of noise to make. Even though you don’t hear “skips” in between pieces of data, the sound is actually a series of noises that are 0.0000226 seconds long. CDs are digital technology then, because they rely on many individual pieces of data rather than one long stream of information.

Is digital better than analog?

Well, let’s stay with the record player vs. CD player discussion. Listening to the same recording on the two different players produces two distinct sonic experiences. If you’re not a huge music fan, but like to hear tunes from time to time you might not even notice it. But if you’re a music fanatic who takes his sound quality very, very seriously, then you probably notice a lot of differences. The analog record is going to have “signal noise” where electrical and environmental interference distorts and slightly interrupts the signal- the slight hiss you hear in the backgroud of a record, and the loss of audio quality as the signal fades in strength over time. Never mind the pops and scratches that come with the wear and tear of handling and playing the record. Purists insist however, that the analog signal provides a certain “warmth” and some talk about the presence of a “soul” to the music that can’t be found in digital.

Of course, this isn’t to say that CDs sound bad. In fact, without the signal loss and interference, many everyday listeners think CDs sound far superior to records. The digital signal means a “cleaner”, “brighter” sound that comes from listening to only the music, and not the noise in the background. However, something is lost with CDs, literally. Like the brief moments of time between the jumps of the second hand on the clock on the right in our earlier analogy, the tiny moments between each of the 44,100 tiny pieces of sound aren’t recorded or played back on CD. These microscopic little pieces of music that aren’t on the CD lead some audiophiles to call digital sound “cold” and slightly “empty”.

The bottom line is this however. Most music that is being made today is being sold on either CDs or MP3 downloads (learn how to start using MP3s in my earlier Learn This Now post here), and not vinyl records. Even disc jockeys that play in clubs rarely use real vinyl anymore. So even if you think CDs sound a little worse than vinyl, chances are you already use digital music almost exclusively, and will continue to do so.

What should I know going forward?

The truth is, there aren’t many traditional analog technologies still in use. Radio and television broadcasts are still analog, but with the rise of Satellite Radio services like Sirius and XM, and the coming American Digital Television transition, even those are on the way out.

The important thing to remember is that just because something says “digital” it isn’t necessarily a huge leap over an old technology, or even particularly new. But now that you know what digital and analog means, you are empowered to decipher any such attempts at newfangled tomfoolery. Stay tuned to ManageMyPractice.com for the resources you need to stay ahead of the curve. Cheers!

Note from Mary Pat: The change to digital technology has tremendous implications for healthcare.  Think about telemedicine, electronic health records, and sharing of all information digitally.  Expect some significant changes down the road in medical records between Obama’s stimulus plan and dollars for HIT and the transition to digital technology.