Doug Palmer is a practice management, billing and coding and revenue cycle consultant with over 17 years of experience in the industry. He was nice enough to answer some questions for our readers about his experiences and where he sees coding going in the future. 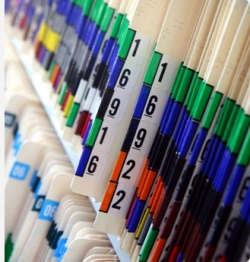 MMP: How did you get started in coding?

Doug:  I started in the industry as a medical biller with a billing company in NY City. In a rather short period of time, I became familiar with the coding systems (COT, ICD-9, and HCPCS) and began to want to know more. I also wanted to know more about the overall Revenue Cycle Process. That starting point in billing led me to coding for several reasons. Aside from personal and professional development, I realized that I would be more marketable with that skill set. I was right. As I learned more and more about coding…more and more opportunities seemed to come my way.

MMP: What type of coding education and certification do you have?

Doug: I have gotten most of my education in coding “on the job”. I have attended many seminars, CEU courses, internal education opportunities with employers, etc., however, I have never matriculated into any formal or long term courses of study in coding other than a BS in Health Administration which did not specifically focus on coding. At the same time, with my CCS-P Certification through AHIMA, I have taught coding and related courses both in a formal classroom environment in several adult education schools as well as providing on site education as well as web based instruction to other coders as well as medical providers across the country.

MMP: What was your first coding consultant position and how did it come about?

Doug: After a very bad employment experience where I had to stand up for being compliant against a manager that had no regard for regulations nor the impact it had on the organization we worked for, I sought a different environment. A company based in California contacted me about a travel consulting position and it felt right and seemed to be just what I needed, and indeed it was. I have been consulting ever since. It has afforded me growth I do not think possible remaining in one environment. It has exposed me to countless organizations giving me the opportunity to see what works well, what doesn’t, and has made me a better coder, manager, and consultant.

MMP: What tools do you use to assist you in your day-to-day coding?

Doug: Of course, the basics are the CPT, ICD-9, and HCPCS publications which are the cornerstone of coding. There are a wide variety of resources out there that help you think outside of the your environment and open up a more global perspective. Some examples are Coding Alerts from The Coding Institute which are published in a number of specialties, Coding Clinic, and  Medicare NCDs and LCDs. These resources provide great insight, clarification, and education on a broad range of coding scenarios.

MMP: What do you find interesting about coding?

Doug: This is a tough question to answer only because there are so many fascinating aspects to coding. To be a part of the health field and know that coding goes beyond mere reimbursement, is one of the elements that I find both intriguing and satisfying. When a news report states a statistic such as a higher or lower incidence of a particular condition in a particular area, I know that those statistics are captured in large part from the coding that goes on.

MMP: What have you seen change about coding over the years?

Doug: I began in healthcare at a time when E&M Codes were assigned by the provider in essentially an arbitrary fashion based on what they believed the services they rendered were worth on an ascending scale. Largely, government programs such as Medicare and Medicaid with their dual role as payor and regulator of health services have led the way in changing, shaping, defining, and standardizing coding. E&M codes in particular, at least on the professional services side, have become much more standardized and in theory are more equitably assigned then they were prior to the 1990’s. Payment methodologies such as fee-for-service, DRG (Diagnosis Related Groups), capitation, HCC (Hierarchical Condition Categories), and CRG (clinical risk groups) all influence or depend on the core of coding and thus depend on complete and accurate coding to be optimal.

MMP: Would you encourage people to go into medical coding as a career? Why or why not?

Doug: Well, as an educator in this field, I would encourage people to explore it and find out enough about it to make a sound decision for them. While I find this field fascinating, rewarding, fulfilling, and have made a successful career of it, it may not be for everyone. There can be long arduous hours in front of a computer screen, with the requirement to think critically and analytically. This may not appeal to everyone. Reading some records may make some people squeamish or depressed. The many rules, which change regularly, may not necessarily be for everyone to digest. However, for those that are looking for not just a job, but a career with so many opportunities, a career where one can feel that they play a valuable role in a process and can learn so much, I would highly encourage coding as a possibility. It really is a wonderful field to work in.

MMP: Do you think computer-assisted coding (CAC) will ever take the place of coders?

Doug: Absolutely not. At least not as long as the coding methodology is as it is now. I have actually worked with a number of these systems, and there are too many areas where context is involved and these systems are yet to be able to accurately and reliably handle context. If that hurdle is ever solved, then perhaps. But, until then, I can not envision this being nearly as reliable as the human element.

MMP: Do you think the change to ICD-10 is being underrated as a healthcare-wide change in the US, or do you think people are making more fuss over it than is really necessary?

Doug: I view the transition to ICD-10 as a positive step forward. It offers a much more accurate and precise means of reporting conditions, circumstances, anatomical locations, and other important and relevant information. Of course, change is always disruptive and polarizing. The issue is still being deliberated at many different levels and lobbied by many different organizations based on so many different agendas. I think that is to be expected when a change of this magnitude is proposed and initiated.

MMP: What has been the most interesting or unusual coding job you’ve ever had?

Doug: I have been so many places, performed so many functions in such a wide variety of roles and specialties, this is difficult to choose only one. However, I believe that a project for a large health organization in Northern California would have to be the one I choose. In this capacity, I supported the transition to physicians, PAs, and NPs being responsible for assigning their own Evaluation and Management codes. This was all new to these providers and a task that they did not wish to be responsible for. It was a great challenge to go in and not only teach them a topic that they were not embracing, but to accomplish this in a very short period of time, and ALSO to achieve proficiency while changing a mind set. I got to do this over and over at each location and in the end did so successfully to the satisfaction of not only the organization but to the reluctant providers as well. I have to choose this over many equally interesting accomplishments based on my passion for providing education to new and veteran coders as well as health care providers.

Douglas B. Palmer, BS Health Administration, CCS-P has over 17 years of Practice Management, Revenue Cycle Management, HIM and Consulting experience. He has worked with medical practices of all sizes, been on the management team of some of the countries leading healthcare facilities, and has consulted with prominent insurance carriers. He is expert in all reimbursement methodologies, revenue cycle issues, EMR implementation and HIM management. He has overseen and managed the recovery of millions of dollars in revenue for clients and past employers. As the principal at Phys Assist Consulting, he prides himself on being personally involved and connected with each end every client and exceeding clients expectations as the minimum acceptable outcome.