I haven’t written much about the impending 29% Medicare physician payment cut. This threatened cut has happened every year for the past 10 years. Every year at the last second, Washington is convinced that if cuts take place, physicians really will stop seeing Medicare patients and they halt the cut.

It’s not a bluff. Physicians can’t afford to see Medicare patients, TriCare (ex-military) patients and disabled patients with Medicare benefits now, and they will drop out by the tens of thousands if they get paid any less. Any businessperson worth their salt will tell you that when revenue does not exceed expenses, you do not have a sustainable business model. Physician have cut expenses to the bone, taken deep cuts in their salaries and ultimately have sold their practices when they just can’t make it anymore.

But never mind the doctor, what about the patients? What happens to them when physicians stop seeing Medicare patients? Texas Medical Association has made an outstanding video that explains it in language we can all understand.

Other organizations that are working to eliminate physician reimbursement being tied to the SGR are MGMA and the AMA.

Deja Vu All Over Again: The Medicare Fee Cut is Pushed Back to November 30, 2010

I don’t know about you but I am emotionally exhausted thinking about and worrying about the on-again off-again cuts in Medicare fees for physicians.

Here’s the scoop: late Thursday evening, June 24, 2010, the House of Representatives passed the ” Preservation of Access to Care for Medicare Beneficiaries and Pension Relief Act of 2010 (H.R. 3962)” which includes a delay in the 21+% fee cut. Because the same legislation was already passed by the Senate, it now goes to the President for his signature and it becomes law.  It is anticipated that this will happen quickly and CMS will have the MACs start processing new claims with dates of service of June 1, 2010 and later at the 2009 fee schedule plus a 2.2% increase.  The MACs will also have to reprocess the claims already paid for dates of service June 1, 2010 and later that were processed with 2010 fee schedule and that big fat cut.

Q: What should we be doing for the next 5 months and 6 days?

Image by Getty Images via @daylife

A: Have someone in your practice take a video of your providers introducing themselves, telling how many Medicare patients they have and how they can’t afford to see Medicare patients unless the SGR formula is replaced with something that works. The video doesn’t have to be slick – just real.  Send it to your senators and representatives.  Send it your local TV news.  Post it on YouTube.  Imagine hundreds of thousands of providers introducing themselves and talking about their patients.  It would be powerful. 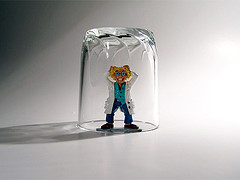